The Trio Behind “Creating Carmen”

“CarmenCo magically evoke the heat, the tension and bustle of the drama” 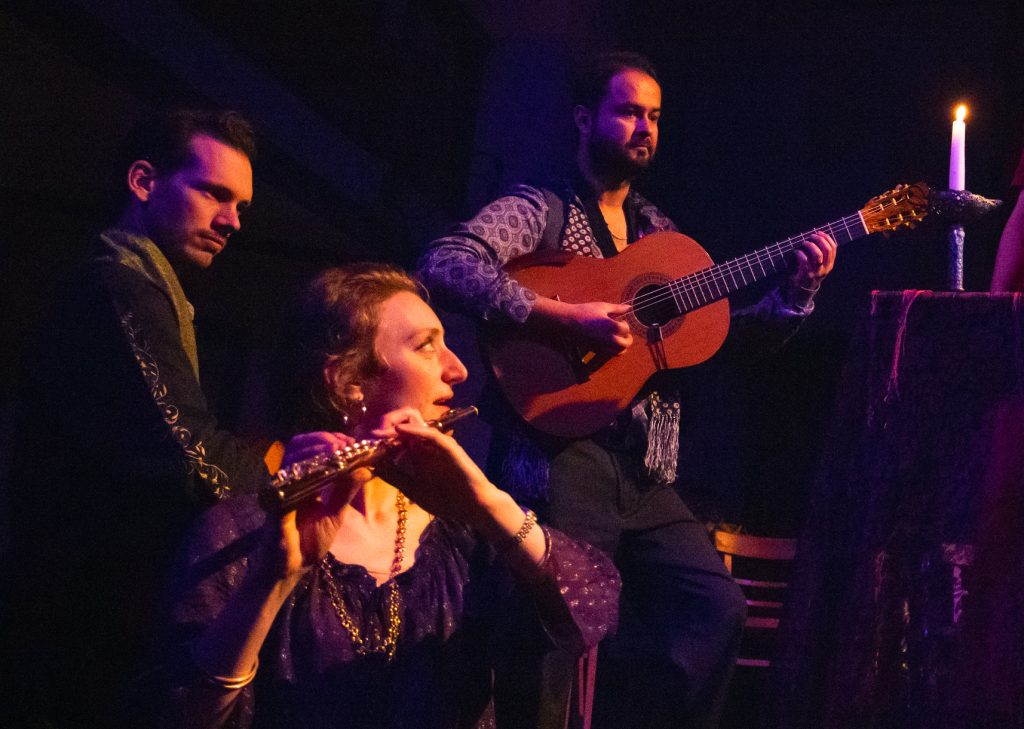 Exploiting the rich texture of 2 guitars with or without flute or voice, as well as our skills in arranging, we perform vibrant, visual, varied yet cost-effective programmes which can easily tour low-engaged communities. We perform all our music from memory and can move around and dance while playing.

In 2019 we won a generous Arts Council England grant to develop and tour a new concert-play “Creating Carmen”, using our music and arrangements of music, but adding two actors, lighting, director and script writer. In 2020 we re-arranged David and Emily’s “Make Merry” Christmas Carol arrangements for the trio, allowing us to use mandolin, banjo and both steel and nylon string guitars live to bring the unique world-music style arrangements to life as a lockdown video concert for several music societies. 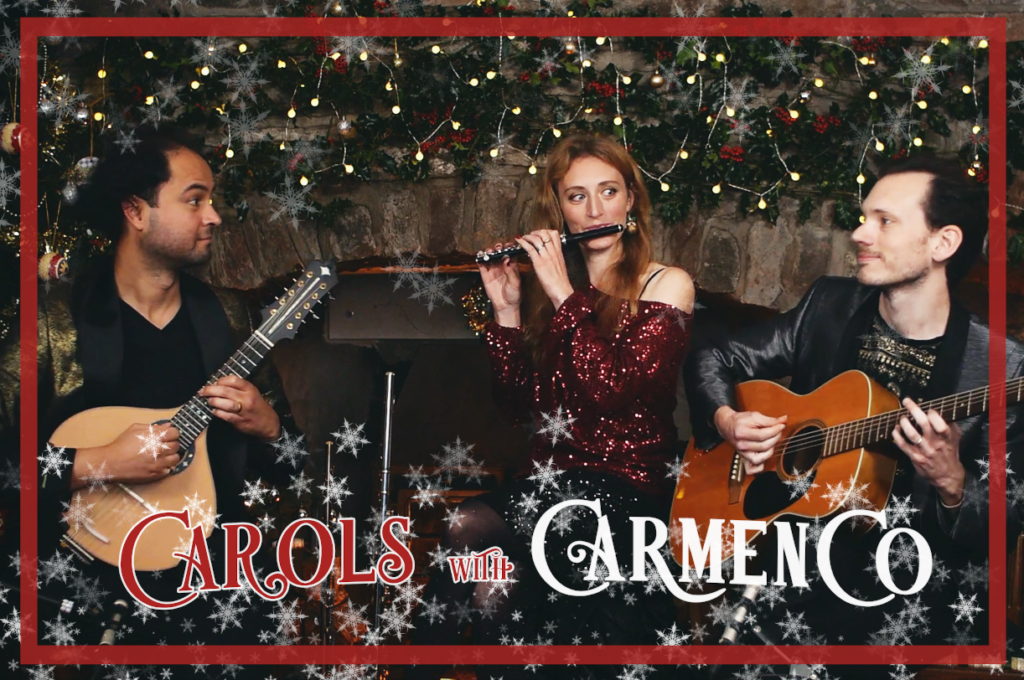 CarmenCo trio was formed when international solo guitarist Francisco Correa (www.franciscocorreaguitar.com) joined the Andrews Massey Duo, (formed by Emily & David in 2009). This duo has a fine pedigree: won the Tunnell Trust Award 2012-2013; were Royal Overseas League Competition semi-finalists 3 times & have appeared at Wigmore Hall, St Martin in the Fields & Kings Place & abroad in Germany, Italy & Sweden. They have made 3 CDs. One of their videos had 240,000+ YouTube views. For more information see www.andrewsmasseyduo.com

A concert play by Clare Norburn

Creating Carmen is more than a concert. It occupies the borders between a play and a concert, with 60/40 music to spoken word. It is a fully staged, costumed and professionally lit show for 3 musicians and two actors. The main characters are Prosper Merimée, writer of the novella on which Bizet’s Carmen was based, and Carmen herself as imagined by Merimée.

Prosper Merimée is struggling with his latest novella, when his leading character – Carmen – turns up in his study, larger than life, with a band of musicians in tow and chaos in her wake. Which one of them controls the narrative? And what happen when Carmen discovers the nasty ending Mérimée has planned for her?

A fun-filled evening of fantasy, comedy, drama and tremendous music arranged from Bizet’s Carmen and Spanish and Spanish-inspired music by Boccherini, da Falla, Garcia -Lorca, Granados, Ravel and Albeniz, all arranged by the musicians for guitars and flute /voice.
The project is a collaboration with writer Clare Norburn, who has developed a series of concert/plays which have toured to most of the UK’s leading venue and festivals, and director Nicholas Renton.

“bouts of intimacy, creativity and comedy were brilliantly matched with nearly all the best Spanish tunes I can think of… a very happy evening’s entertainment” **** – Andrew Connal, The Latest 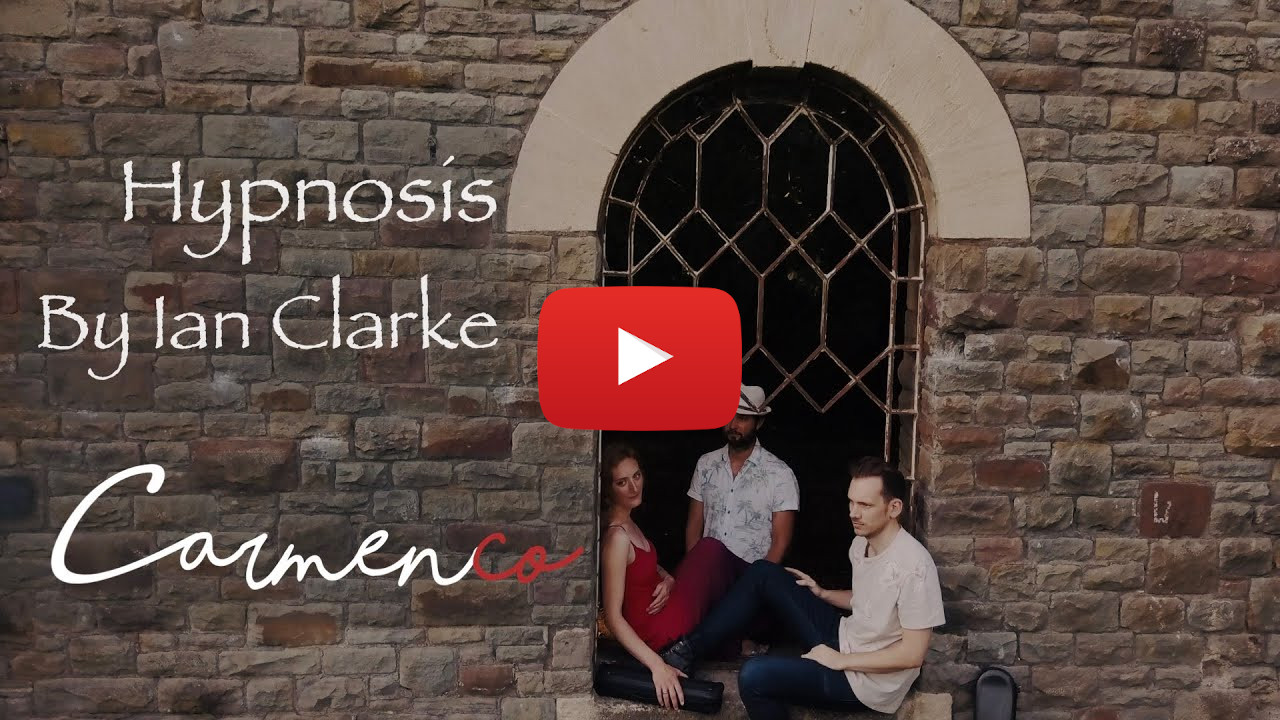 Check out our new video of Ian Clarke's Hypnosis 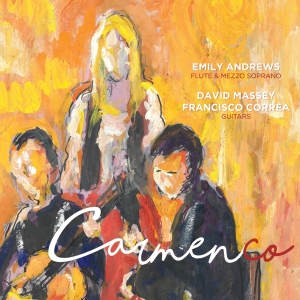 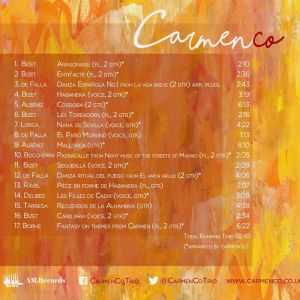 CarmenCo is out NOW! Featuring 17 tracks of gorgeous Spanish and Spanish-inspired music for guitars, flute and voice.

£15 including postage and packing.

To purchase CarmenCo as well as other AM Records releases, visit our shop. 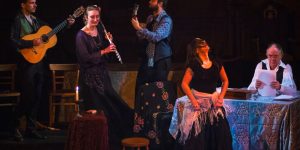 Writer Clare Norburn gives some background to Creating Carmen, and insight into her writing process for the show.